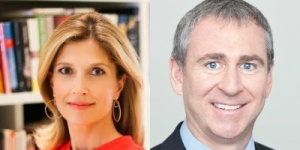 Billionaires Ken and Anne Griffin have been having a rather heated divorce lately, and it now looks like even the custody arrangements of their children are going to be a center of contention.

Recently, Mr. Griffin released the details of their prenuptial agreement, showing that Ms. Griffin agreed to the terms of receiving millions of dollars, and that she even had three different law firms look it over before agreeing to it.

Ms. Griffin, however, is still seeking to have the arrangement declared invalid, as well as seeking sole custody of their three children.  She has recently filed for a restraining order, and that Mr. Griffin should only be allowed “reasonable visitation.”

Ms. Griffin has recently tried to move to New York and take the kids with her, but Mr. Griffin is filing for joint custody, hoping to keep them in Chicago.  The children’s grandparents live in Chicago, and he claims that moving them to a city they have only occasionally visited will be too disruptive to their lives.

The children’s school activities, such as soccer, their caregivers, their doctors, and their grandparents are all in Chicago, and Mr. Griffin believes that should be proof enough for the children to stay.

Ms. Griffin argues that Mr. Griffin has been a distant father, and painted him as being aggressive in the matter, stating that he said he would “destroy” her if she didn’t drop her claims, and that he wouldn’t pay for any of their expenses if she moved to New York.  She defended her plans to move to New York by saying that she serves on several philanthropic boards there.

Ms. Griffin is also seeking exclusive possession of all three floors of their Chicago penthouse, saying that Mr. Griffin shouldn’t be able to remove her property or fire any of the family’s employees.
If you are going through a divorce, you’ll need a professional on your side to ensure that you aren’t banned from raising your children.  Our child custody attorneys will fight for your cause, making sure that you have every right to raise your own children. Call us today to see how we can help you.