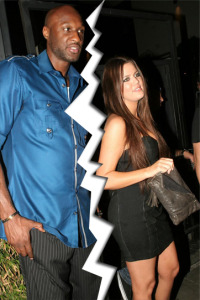 In what’s turning out to be strange proceedings, Lamar Odom has disappeared, refusing to sign divorce papers in response to make the break official between him and his wife, Khloe Kardashian.

10 months ago, Khloe filed for divorce from Lamar Odom after the revelation of Odom’s drug use and infidelity going public.  According to sources, Khloe had been keeping it a secret for almost two years, doing what she could to help save their marriage.  In the end, however, she has had enough, and she’s ready to move on.

Yet Odom’s disappearance has caused a hiccup in the healing process for Khloe.  Odom still hasn’t filed his own response to Khloe’s initial filing, and hasn’t been heard from, or even seen, for several weeks.

The delay doesn’t halt the entire divorce process, however. In early October, the Los Angeles Superios Court Family judge filed papers saying that Khloe must make a choice to either file a Request to Enter a Default, or a Request for Dismissal.

A Request for Dismissal would be the end of the divorce proceeding itself, where one or both parties decides to cancel the divorce and they remain married.

The Request to Enter a Default, however, is when a spouse fails to respond to a divorce filing within 30 days, or if he or she cannot be located.  This option would allow Khloe to continue with the divorce, despite Odom’s silence, and is a viable option when there are no properties or children between the two.

In the initial filing, Khloe asked to terminate the court’s ability to grant spousal support to Odom, but she has also not requested any support from Odom.  She also requested that they both pay their own attorney fees.

If your spouse has recently filed for divorce, your next step, before even responding to the filing, is to find an experienced divorce attorney.  A divorce attorney will be able to guide you through the mucky process of divorce, and can keep your case on track for the greater good even if you become blinded by the heated emotions that are common in divorce.

Call us today to speak with one of our divorce attorneys.  Having an ally during the struggle can only do you good.