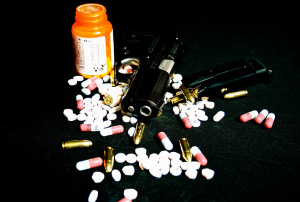 A Long Island cardiologist has been arrested after an initial investigation concerning prescription pills lead investigators to the discovery of a hidden stash of weapons, many of which were illegal, and an elaborate murder-for-hire scheme to have his medical rival (who had been his business partner at one point) killed.

Dr. Anthony J. Moschetto, age 54, was allegedly targeting his ex-business partner, now medical rival, hoping to have him either assaulted or killed.

According to authorities, Moschetto allegedly solicited two men, James Kalamaras, age 41, and James Chmela, age 43, to destroy his rival’s office building.  The arson attempt had failed, and so Moschetto searched for a hit-man to either hospitalize his rival for $5,000, or to kill him for $20,000. According to authorities, he had even said that, if his rival’s wife were present, to go ahead and assault her, too.

The entire plot was foiled, however, when police began investigating a curiously high amount of oxycodone prescriptions coming from Moschetto’s office.  The investigation led to the solving of Kalamaras and Chmela’s failed arson attempt (which had then been still unsolved), and after police took out a warrant to search Moschetto’s home, they found an armory of weapons.  Hidden behind a mechanized bookshelf was a horde of guns, many of which were illegal, and a stash of blades, axes, knives, and metal knuckles were found in the investigation.

If you are facing criminal charges, you need to find a skilled criminal defense attorney right away.  The prosecution in criminal court is ruthless, and they will do everything in their power to put you behind bars.  Take the initiative and call us today to start building your defense.  Your freedom depends on it.