Home » Uncategorized » Wife of Creed Frontman, Scott Stapp, Files for Divorce, Then Things Only Get Worse

Wife of Creed Frontman, Scott Stapp, Files for Divorce, Then Things Only Get Worse 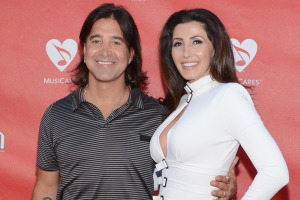 The former Miss New York and Mrs. Florida  has been married to Scott for 8 years, but filed for divorce in Palm Beach County after strange behavior from Scott, which she links to drug use.

In the divorce Petition, Jaclyn included texts messages she alleges Scott sent while on a drug binge in October.  The texts include strange messages, such as claiming that biological weapons were on the way to Florida, and that the CIA is behind Alcoholics Anonymous.

Jaclyn claims that Scott disappeared from their home in early October, and he hasn’t been telling her where he is since.  Her divorce filings assert that Scott has been binging heavily on hardcore drugs such as amphetamines, crystal meth, and steroids, and also claim that he has become extremely paranoid, threatening to harm himself and his family.

On November 11, Jaclyn filed a Marchman Act petition against Scott, which could lead to a judge ordering Scott into rehab for up to five days at first, and could possibly lead to months of treatment if necessary.

In the filing, Jaclyn has asked for full custody of the children, claiming that Scott is incapable of caring for them.

Lately, things haven’t been looking good for Scott, as he has released a video claiming to be broke and living in a Holiday Inn, however, he denies the allegations of drug.

If you are considering getting a divorce, your best bet is to find a skilled divorce attorney as soon as possible.  The divorce court is not the place to exercise your right to represent yourself, as overlooking any minor detail could lead to the loss of a great amount of property.  Call us today and speak to one of our attorneys.  You can trust that we will handle your case with expertise, demanding you are allotted the property you deserve, as well as the custody and support to properly raise your children.