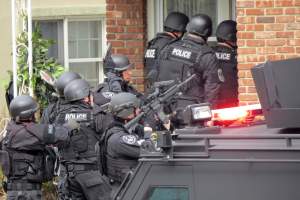 A 17-year-old Canadian teen has been arrested for allegedly pulling serious hoaxes on a Florida girl he met online, including calling in shooter and bomb threats on her school, as well as calling in a fake murder at her home.

The hoaxes first started in September, when the teen called the sheriff’s office of Polk County, FL, threatening to “shoot everyone” at Fort Meade High School with an AK-47.

Then, in October, he called again, this time with a fake bomb threat at the school.  In November, the teen continued his harassment by calling the police and saying he was inside the house that was the girl’s address.  He claimed he had killed his parents, and that he would kill any officers who arrived at the scene.

With each call, the police responded instantaneously.  They put the school on lockdown for the shooting threat, frightening the students, and raced to the girl’s home in the middle of the night to respond to the murder call.

The hoaxes all stemmed from an online relationship that didn’t turn out the way the boy wanted. The two teens met online and, in the boy’s mind, they had been dating.  When the girl rejected him, however, he retaliated, telling her he would “swat,” the term for a prank where a SWAT team is erroneously called to raid someone’s home.

Canadian police ended up catching him, and he has been charged with one count of extortion, three counts of public mischief, and three counts related to breach of probation.  Additionally, Florida authorities are planning to pursue civil action against the teen to make up for the thousands of dollars wasted in police resources.

Florida police won’t be seeking extradition, however, because the accused is a minor.

If you are currently facing criminal charges, you’re going to need the best to stand for your freedom.  Our criminal defense attorneys are legal professionals, and we will stand by your side to face any charges against you.  Don’t face the courts alone, call us today.