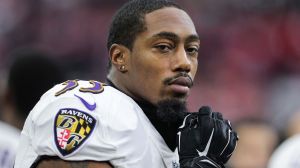 For the past 10 months, the state of New Jersey has been looking to arrest Ravens free safety Will Hill for failing to pay child support.

Since March 2014, free safety of the Ravens NFL team, Will Hill, has had an active warrant out for his arrest in the state of New Jersey.  Hill owes thousands of dollars in back child support, and although the police aren’t actively hunting him down, if he were to have interactions with the police, they would be required to take him in.

Hill was arrested in 2013 for failing to pay child support, and has fathered four children with three women.  Additionally, he has had some other trouble with the law, including being arrested in 2011 for driving with a suspended license, as well as more recents problems concerning drug use.

In late July, Hill was signed to the Ravens on a one-year contract for $570,000. According to a source close to Hill, he isn’t surprised about the warrant for his arrest.

If you are unhappy with your current child support payments, it’s time to do something about it.  Our child support attorneys are legal professionals who are eager to represent your case.  They will fight for your parenthood and demand that your children are given the support they need and deserve.